When the holiday season passes and 2021 rolls in, homebuyers throughout the U.S. will begin searching for their next place to live. The tumultuousness of 2020 could certainly make next year harder to predict than ever. But nonetheless, Realtor.com has released its annual housing market forecast.

Driven by a new remote economy and stable government jobs, most of these top markets are state capitols like Sacramento, California, or rising tech hubs like Charlotte, North Carolina, and Boise, Idaho.

“This past year, we’ve all become more reliant on technology to work, learn, and maintain personal connections. The technology hubs that make this possible are thriving, as are their housing markets,” said Realtor.com’s Chief Economist Danielle Hale.

“Additionally, the relative stability of government jobs in the past year has driven home prices and sales in several state capitals to the top. Homebuyers, particularly younger first-time buyers, looking in one of these markets should expect rising prices and heavy competition. Meanwhile, sellers will remain in a position of power, but will find themselves on the other side of the bargaining table when buying their next home.”

The pandemic caused layoffs and business closures across the nation, but the switch to remote technology and increased reliance on software and other digital products that are keeping businesses running have made an already booming tech sector explode even more.

On top of that, the stability of government jobs during these times has made working outside of the private sector more lucrative, allowing for state capitols and Washington D.C. to see overall growth topping 10%.

Affordability Is Driving Homebuyers Outside of Traditional Giants

New York and San Francisco are typically the leaders of business and technology, but housing prices per square foot and the cost of living have appreciated so much in recent years that living there is less and less economical for fresh college graduates or older millennials looking to raise their families. Not when a few hours west in Harrisburg, Pennsylvania, they can get a larger home with stronger job growth at $122 per square foot versus New York where it’s $216.

The contrast is even starker when comparing markets in California. Sacramento, Realtor.com’s number one ranked market in 2021, has a price per square foot of $284, a rising technology sector, and also happens to be the state capitol. On the other hand, in San Francisco, Silicon Valley has driven the price per square foot up to $679—more than double the price of Sacramento. Living there is starting to make less and less sense in a world where telecommuting is the norm for many.

As a result, millennials seem to be taking advantage of these  while they can. While this cohort accounts for a national average of 13.5% of the market share, millennials make up 14.1% in these hubs.

“[W]hen it comes to millennials purchasing homes in the top 10, two trends are emerging. In half of this year’s top markets, including Charlotte, Boise, Phoenix, Harrisburg, and Riverside, millennials are already homeowners and expected to make the majority of the home purchases that drive home price growth and sales,” the report noted.

“In the other group of markets, such as San Jose, Seattle, and Denver, the high cost of living has made homeownership a difficult accomplishment, not only for millennials but for all generations. The high number of millennials in the market shows how popular these markets have become, but older, more financially established generations will be the ones purchasing the majority of the homes next year 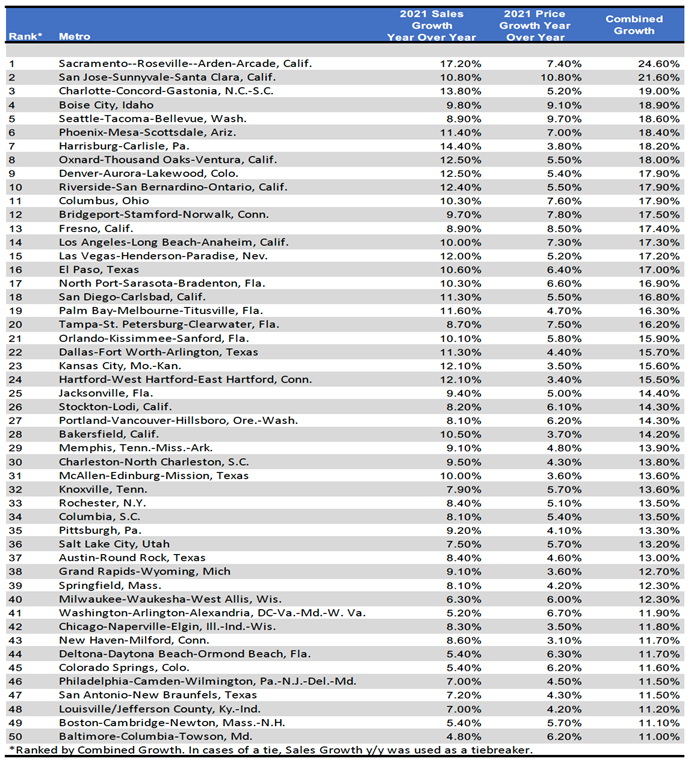 Keep an Eye on Sacramento, San Jose, and Charlotte

In Sacramento, median home prices are marked at $554,050, perfect for homeowners fleeing from San Francisco for the increased affordability without having to completely uproot their lives in Northern California.

The same is true in Southern California with San Jose placing second on the list. Median home prices are hovering around $1,199,050—a high number for someone outside of the West Coast but right in line for someone leaving Los Angeles’ bloated prices and exorbitant cost of living. Not to mention San Jose has one of the highest performing school districts in the United States, making it the perfect location for young families looking to cut costs without sacrificing quality of life.

Move over to the East Coast, where financial giant and ultra-fast-growing Charlotte, North Carolina, is continuing to attract some of the best talent in America, which is bolstering one of the top housing markets anywhere around. Median prices hover at roughly $369,000, making Charlotte an extremely affordable spot. With close proximity to the prestigious Duke University, North Carolina State University, and University of North Carolina at Chapel Hill—aka the “Research Triangle”—Charlotte is the logical next step for recent graduates looking to kickstart their careers.

As for investors, while these markets offer the most appreciation value, note that you’ll be paying a higher price to enter the market. Land a deal though, and you’ll have no problem flipping or finding renters willing to pay.